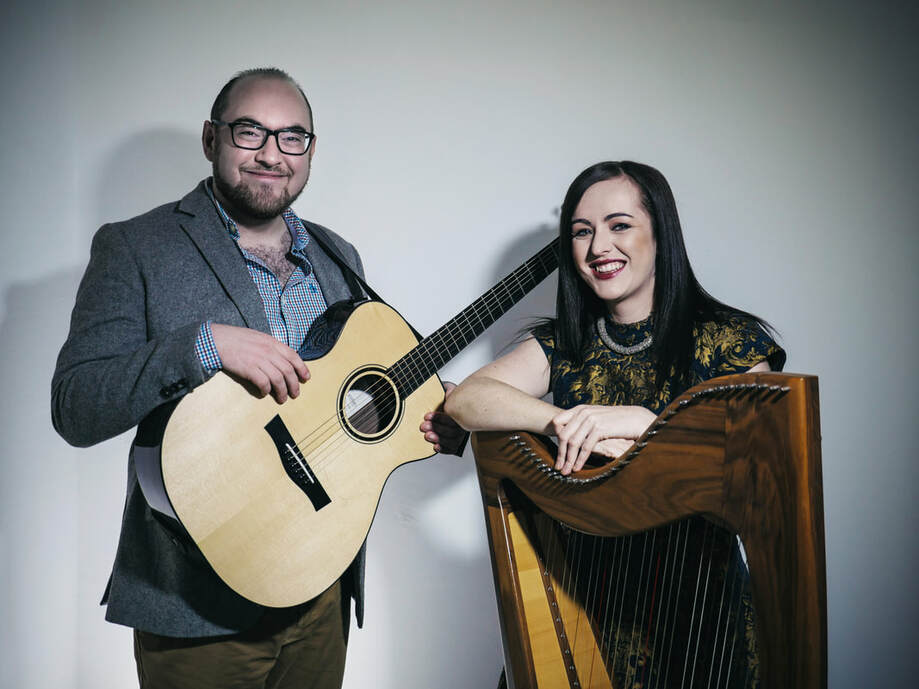 With snappy strathspeys to heartfelt airs, and rip-roaring reels to chripy jigs, Rachel Hair and Ron Jappy are two of Scotland's most respected traditional musicians. Pairing the old with the new, their eclectic mix of traditional and contemporary tunes performed on Scotland's most ancient of instruments, the Scottish harp the clàrsach and the more modern acoustic guitar, results in live performances that ooze charm and skill, with entertaining prowess. They will be promoting their eagerly waited debut duo album 'Sparks'

Rachel Hair - From the Highland village of Ullapool, a prominent performer in the Scottish Traditional Music scene and a much sought after performer, composer and tutor of the lever harp, Rachel has released 4 critically acclaimed albums and toured extensively throughout Europe, the USA and beyond, both as a soloist and with the “Rachel Hair Trio"
“A superb Highland Harper” (BBC Radio 2) Rachel Hair is “One of the UK’s finest contemporary Celtic harpists and tunesmiths” (Songlines)

Ron Jappy - Born and brought up in the small, coastal village of Findochty in the North East of Scotland, Ron began fiddle and violin lessons from a young age in primary school before later learning the acoustic guitar. Having toured extensively through the UK and Europe since graduating from the Royal Conservatoire of Scotland in 2011, Ron has performed with a number of successful artists including Jamie Smith’s Mabon and Skerryvore and appears regularly with the National Youth Pipe Band of Scotland and the Scott Wood Band.
Sandy Brechin  - Thursday 1st November 2018 8pm
​
One of Scotland's best known accordionists, Sandy is in high demand as a performer for concerts, theatre and ceilidhs and a busy tutor teaching privately and for various organisations, including being the full-time accordion tutor at the National Centre for Excellence in Traditional Music in Plockton, where he travels to each week from his home in Edinburgh to teach talented young musicians.
On the side of all this, Sandy also runs his own recording label 'All Brechin Records' through which he has released many of his own albums as well as other artists CDs. He has had guest appearances as a session musician on several other albums, produced accordion DVDs and has also published a book of his own compositions in conjunction with Taigh na Teud. He is a well known composer and many of his tunes are being performed and recorded by other traditional musicians.
On top of all this, Sandy's humour is as great as his musicianship, so you are in for a fantastic night!

Please email to book your place and we will send you the venue address information: hello@helensburghhouseconcerts.co.uk
Price: donation which goes to the musician (suggested amount £10 or whatever you can afford)
Starts at 8pm, BYOB
CDs and tune books will be available to buy on the night